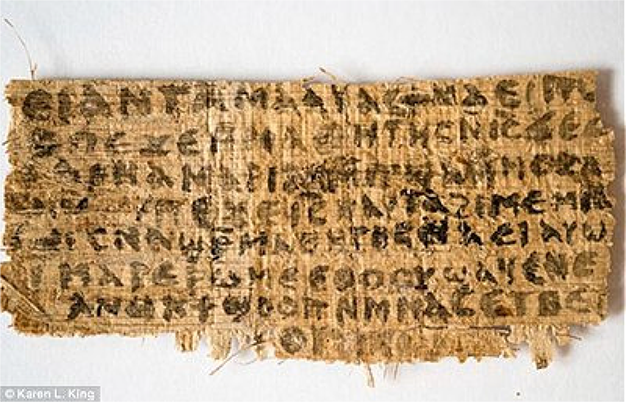 Many of you may have heard about an newly discovered Gospel, "The Gospel of Jesus's Wife". It is a business card sized fragment that has written upon it the words:
"Mary is worthy of it"
"Jesus said to them, my wife."
"... she will be able to be my disciple,"
“As for me, I dwell with her in order to ..."

Click here for a PDF copy of Christian Askeland's response to questions that were posed to him by Tyndale House about the so called "Gospel of Jesus's Wife". It is well written and lays out some very good reasons that this is a fake. He is a Coptic scholar and has some insight as to what is going on with the writing. He pretty much tells us that based upon how it was written, that it was done by a forger who had very rudimentary Coptic skills. They copied parts of other texts to make this writing happen. In fact it was so poorly done, that almost all of the real scholars out there know it is a forgery.

It could be a real piece of an old manuscript. There were lots of false gospels running around in the 4th Century. Especially in Egypt, where gnosticism took hold in a big way. It could be authentic but wrong.

However the way the Coptic is written, it is pretty clear that this is a forgery. They took and copied words from other works, including any errors and then tried to put it into a sentence. Do you know how you try sometimes to read the instructions from something that came from Japan or China and the sentence structure does not make sense? This is the same thing but even worse as they use the wrong tense of the words as well.

In April of 2014, Harvard declared the papyrus to be authentic, citing all sorts of scholars. However the evidence for it just does not hold up. The more that reporters, scholars and antiquity dealers track where it came from, as well as how the Coptic was written, it really is looking to be a forgery. Of all people, the Huffington Post has actually done some good investigation into this. You can read two articles from them by following these links:
http://www.huffingtonpost.com/2014/04/10/jesus-wife_n_5124712.html
and
http://www.huffingtonpost.com/2014/04/25/gospel-jesus-wife_n_5206932.html

The reason that I am writing this to you is because you will soon see all sorts of fringe scholars and other that will use very poor scholarship, to claim that this fragment confirms the authenticity of the "Gospel of Mary", as well as any other myths that they are trying to further. The Gospel of Mary is a Gnostic book in origin and written sometime in the 2nd Century AD, not penned by Mary, but rather someone who used her name in order to try and twist doctrine to meet their gnostic ideals. It is the typical case of mankind trying to conform Jesus to our image and our ways.

Yet we are to be conformed to His image and no other. We are not of this world! This is why we stick to the Bible as given to us through the writings of the Apostles being overseen by the Holy Spirit. The early Church fathers experienced and warned us of these false gospels being placed into circulation. They also told us to be wary about false doctrine and teachers. Paul writing to Timothy, and John in 1st John makes mention of them.

I can pretty much assure you that given time this fragment will be used by all the other Dan Brown and Jesus Seminar types who are so called "experts" that insist that Jesus took a wife. I would not be surprised to see a Discovery, or a National Geographic Special telling us that Jesus was married, and base it upon this so called fragment. Keep in mind, that even if the parchment itself is old, that does not mean the writing on it is.

Just keeping you in the know.

May our Lord bless you and keep you,
Pastor Gary